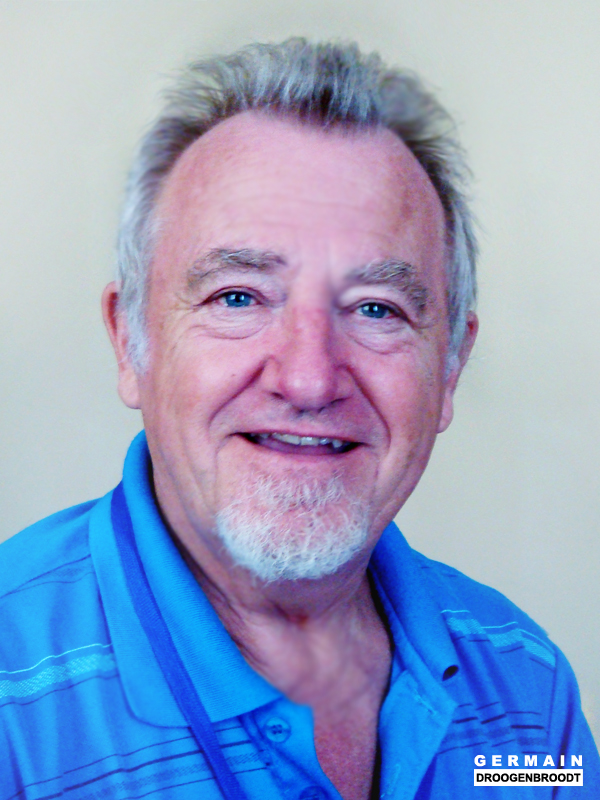 Germain Droogenbroodt, was born 11 September 1944 in Rollegem, the Flemish part of Belgium. In 1987 he moved to the Mediterranean artist village of Altea and integrated in Spanish literary life.

As founder and editor of the Belgian publishing house POINT Editions (POetry INTernational) he published more than eighty collections of mainly modern, international poetry. In 1996 he set up a new poetic movement, called neo-sensacionismo with the famous Chinese poets Bei Dao and Duo Duo.

His poetic oeuvre is many-sided. After his début with “Forty at the wall” (1984), defined as neo-romantic poetry, he published “Do you know the country?”, Meditations at Lake Como (Italy), a collection of nature poems. In 1995 he was awarded a Hawthornden Fellowship (Scotland) where he wrote “Conversation with the hereafter”, poems about death, awarded in Belgium with the P.G. Buckinx-Prize and “Palpable absence”, a bilingual (Dutch-Spanish) collection of love poems. A critic of the Dutch Information Office for Libraries described his love poems as “virtuoso poetry”. At the end of 1998 appeared “Between the silence of your lips”, his collected love poems.

During his sojourn at the Palace-Fortress “Neemrana” in Rajasthan he completed the poetry cycle “The Road”, (read TAO) a poetic bridge between the East and the West, inspiring the Flemish artist Frans Minnaert and the Indian painter Satish Gupta, who enriched “The Road” with their drawings. This rather philosophical, mystical poetry is so far his most popular book, published already in 25 countries, translated by such famous poets as Bei Dao (Chinese), Fuad Rifka (Arabic), Jana Stroblova and Josef Hruby (Czech), Milan Richter (Slovak), Emilio Coco, Luca Benassi and Tiziana Orrù (Italian), Ganga Prasad Vimal (Hindi)…In 2001 he wrote in Spanish “Amanece el cantor” (The Singer Awakes), a homage to the deceased poet José Ángel Valente, followed by “Counterlight” written in Ronda (Southern Spain) in 2002, published in Spain by Calima Ediciones, in Romania by ex Ponto, in Belgium by POINT Editions, in both Mongolian languages by GCompress Co., Ltd. Ulaanbaatar, in Arab by Albayat (Morocco), in Hong Kong by “Contemporary Poetry”, and in Taiwan by Poet Culture. Corp. The latter publication includes also “Counterlight“.

Several famous artists made paintings and sculptures inspired by his poetry as international composers composed music to poems, such as the Dutch composer Bart Bakker who composed the “Germain Droogenbroodt cycle”, 12 pieces for flute.

Germain Droogenbroodt is yearly invited to give recitals and conferences at universities and at the most prestigious poetry festivals around the world. He was nominated for the Nobel prize of Literature 2017.

In Belgium: P.G. Buckinx Prijs with his poetry collection “Conversation with the Hereafter”
In Egypt “Doctor honoris causa”, as poet and promoter of International poetry, 1990
In Spain: Premio de Poesía Juan Alcaide, with his poetry book “In the Stream of Time,
Meditations in the Himalayas”
In Mongolia: the “Pegasus Prize” by the Mongolian Academy of Cultura and Poetry
In Macedonia: Best Poem of the Festival” at the International Poetry Festival in Tetovo
In Lebanon: Laureate of the Naji Naaman's Literary Prizes, 2013
En Bangladesh: the Kathak Literary Prize 2015.
In Romania: “The Grand Prix Mihai Eminescu Prize” for his poetry and the Poesía Mihai Eminescu 2015 + 2017 medal as promoter of international poetry.
In China: “Internationally best poetry translator” by the International Translation and Research Centre
In Japan: the JUNPA Legend Award (2017)
In Italy; Premio Speziale Don Luigi di Liegro at the Museum of the Capitol in Rome, 2017
In France: Prix de Poésie EASAL (European Academy of Sciences Arts and Literature) 2018
In China: Certificate of Honor for his paper “The Road” at the 3rd YiJing Summit Forum in Wuxi, 5th June 2018
In Greece: At the Chalkida International Poetry Meeting in April 2019,
the “Homer ”, European Medal of Poetry and Art
--------------------
Sydney, Australia
12 October 2020