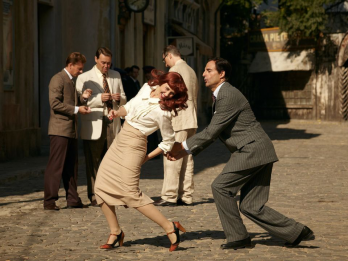 We are happy to partner up with the festival and support the opening night gala on 7th November.

Prized with nine awards, including Best Feature and Best Director at the Romanian Film Awards, the film will carry the audience straight into the middle of a unique and unbelievable 1959 Bucharest, where a quintet of Jewish intellectuals are planning a daring robbery of the National Bank.

‘A wonderfully inventive and fast-paced comic heist movie starring Mark Strong and Vera Farmiga, based on the true story of a group of Jewish friends and former Resistance members who set out to rob a bank. Set in Communist Romania in 1959, as a tide of anti-Semitism sees Jews demoted or dismissed from their posts, the friends decide to retaliate by staging a breathtaking robbery, designed to look like a movie shoot. Full of charm and intriguing plot twists, with winning performances from a talented cast of familiar British actors.’ - UK Jewish